Well, what if it was? What if “Shibuya-kei” wasn’t a unique movement at all, but instead was just a defanged copy of Japanese alternative? Could this be?!!!

END_OF_DOCUMENT_TOKEN_TO_BE_REPLACED

Producer Yasutaka Nakata, who has worked with Hiroshima-based girl group Perfume since 2003, is possibly the most contentious figure when it comes to the question of what does and doesn’t count as “Shibuya-kei.” Few argue that his first handful of albums as capsule count as examples of the genre – especially with how High Collar Girl was seemingly designed to establish capsule as Pizzicato Five’s successors in lieu of the other band’s presence on the scene following their 2001 breakup – but from there on, things get tricky with capsule, and his production work for other performers is even more difficult. Shibuya-kei’s elder spokesman Momus claimed “Shibuya-kei haunts things like [Nakata-produced pop idol] Kyary Pamyu Pamyu,” and lists of Shibuya-kei performers often include at least one Nakata-produced act, but the issue is hardly cut-and-dried; join us as we seek to answer the question of whether or not Perfume should, in fact, be considered “Shibuya-kei.”

END_OF_DOCUMENT_TOKEN_TO_BE_REPLACED

In the halcyon days of Shibuya-kei’s past, female performers were far more than just pretty faces that shrewd marketers decided were bankable. Whether the girls’ personalities manifested themselves in the form of Cibo Matto’s bratty, rebellious stance or the childlike innocence of Takako Minekawa, the important factor was that individual, unique identities were cultivated. It’s no coincidence that most female Shibuya-kei singers were directly involved in the creative process for their albums even when the songs were written by others; Kahimi Karie produced all of her albums, for example, and on later albums even wrote the majority of the lyrics herself. Even when working with veritable titans like Yasuharu Konishi, the women of Shibuya-kei’s past still found time to assert their own creative voices (Maki Nomiya co-wrote some songs for Pizzicato Five, as well as sharing production credit on Bossa Nova 2001); a stark, and refreshing, contrast to the one-way street of manufactured idol personas that defined the Japanese pop mainstream.

Naturally, this would all seem to suggest that embracing the idol format – with its assortment of performers chosen neither for talent nor personality, singing lyrics they had absolutely nothing to do with over music they similarly have no meaningful connection to – is a massive step backwards for the genre’s producers. It is undeniably regressive, in a sense, for people like Takao Tajima and Yasuharu Konishi to go from legitimate collaborations with actual artists to writing songs for idol groups assembled by a record store’s vanity label, but ultimately their choice to start working with idol groups may be the best thing to have happened to Shibuya-kei in a long time.

END_OF_DOCUMENT_TOKEN_TO_BE_REPLACED

As any Shibuya-kei history inevitably points out, the HMV store in Shibuya was often considered the epicenter of the movement; hallowed ground where its staff recommendations formed the basis of a bold new sound that pushed aside the stagnant dregs of post-kayokyoku idol music and reinvented J-pop as the cultured realm of jet-setting musical pioneers who broke down boundaries and made defiantly new music by reappropriating the old. Whether this was in any way true is completely unknown, but when the former HMV closed down and was replaced by “fast fashion” retail giant Forever 21 in 2010, it inevitably seemed like the end of an era, the true death of Shibuya-kei.

While it is indeed true that the Shibuya-kei sounds of Flipper’s Guitar and Maki Nomiya-era Pizzicato Five (Adam and Eve, essentially) had fallen somewhat out of favour in recent years, HMV Shibuya’s former rival has been making a concentrated effort to bring sexy back, so to speak – if the first wave was HMV’s to claim responsiblity for, the new Shibuya-kei revival can call Tower Records in Shibuya its home base.

END_OF_DOCUMENT_TOKEN_TO_BE_REPLACED

Every month, Memories of Shibuya will be taking a look at a different artist or group, with featured songs – regularly one per week, but as this first column is so close to the end of the month, this debut feature will feature two per post.

Pizzicato Five predates the term “Shibuya-kei” – the term was originally applied to the crop of artists that sprung up alongside Flipper’s Guitar years after P5’s 1985 debut – but it would be incredibly difficult to find a group that better embodies the carefree, jet-setting kitsch aesthetic of Shibuya-kei than Yasuharu Konishi’s brainchild. They were also among the first to break out of the Japanese market, signing with American indie label Matador and enjoying a remarkably successful stint as crossover artists – with songs winding up in as unlikely places as the show Futurama (which featured “Baby Love Child” in an episode) and the Kids in the Hall movie Brain Candy (with “Nata di Marzo.”) This first spotlight will focus on the early days of the group, prior to third member Keitarou Takanami’s departure, while the second will highlight the two-piece group’s material.

END_OF_DOCUMENT_TOKEN_TO_BE_REPLACED 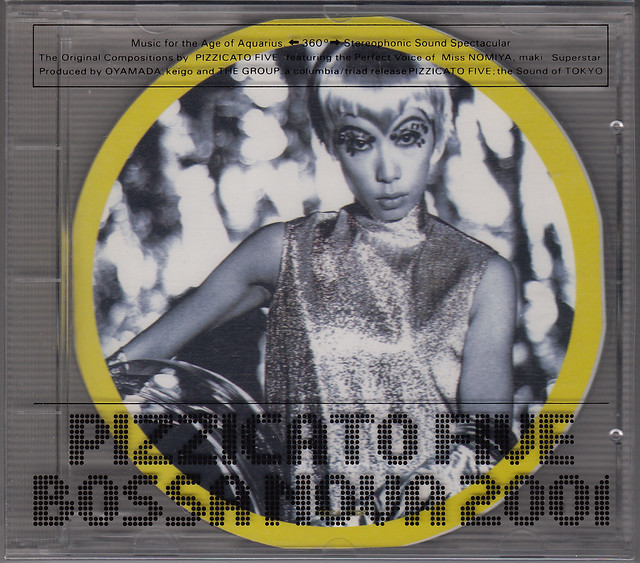 Although largely faded into tragic obscurity by now, the Shibuya-kei (渋谷系, literally “Shibuya style”) boom of the late 1980s and early 1990s was, in its time, a joyful explosion of all that was good in the world. The jet-setting young socialites at the forefront of the movement had weathered the collapse of Japan’s economic bubble with their spirits unbowed, making music (and art, and fashion, and basically anything else they could think of) that brought together the best parts of international pop culture history for a unique, retro-futuristic take on world music. The kitchen-sink approach to blending musical styles makes it hard to pin down exactly what Shibuya-kei sounds like on an objective level, but if the aesthetic could be boiled down to a single, incredibly reductive term, that term would be kitsch. While far more fixated on symbols of 1960s Europe than the post-war era favoured by ’90s hipsters in America (think Twin Peaks), Shibuya-kei definitely traded in the same sort of disregard for the mainstream and contemporary, while lacking any of the anti-authoritarian, anarchistic spirit of other counter-cultural movements. Shibuya-kei was a rejection of the typical, yes, but based on no particular ideology and devoid of any obvious political agenda – yes, some of the associated fashion designers were known to put images of Karl Marx on shirts and jackets, but to attempt to read any kind of appeal to Marxist sensibilities into a genre almost wholly devoted recapturing the high life of 1960s Europe would be a doomed effort from the start. The father of communism is just a symbol, less akin to the already-questionable revolutionary statement of the Che Guevara T-shirt than Singaporean clothing store Giordano’s “Mini-Che” cartoon; a symbol reclaimed so far from its original intent that it takes on a deliriously silly life of its own.

As W. David Marx of Neojaponisme already did a fantastic job in writing a primer to Shibuya-kei, I won’t do his words a disservice by paraphrasing. You can read his excellent write-up here, as well as many other good pieces on that blog tagged with “Shibuya-kei” – unlike myself, Marx had the good fortune of actually living in Tokyo during the boom, and his perspective is blessed to have been informed by personal interactions with the movers and shakers of Shibuya-kei. If my writing seems at all jealous, know that it is. Completely.

While Shibuya-kei, as a term, is generally used to refer to about a decade’s worth of foreign-inspired Japanese music from 1989 to 1999 (vaguely), even in those Japanese artists’ heyday, foreign collaborators were always a fixture. Scottish singer-songwriter Momus found an unlikely career renaissance as lyricist and composer for Shibuya-kei singer Kahimi Karie, loungecore DJ Dimitri From Paris found his “Shibuya Connection”, Apples in Stereo contributed a song to Cornelius’s Fantasma, and many other notable collaborations rendered distinctions between East and West incredibly arbitrary – just one of the many things that makes Shibuya-kei so appealing. Unencumbered by silly, reductive notions of nationalism, Shibuya-kei was an international sound bigger than any place or time. So when I seek to preserve Shibuya-kei – in covering music that has traditionally been labeled “Shibuya-kei”, the music that inspired it, and releases that fit with the aesthetic – I seek to allow for at least a temporary return to the glorious time-out-of-time that was Shibuya-kei’s world. Some could argue that such escapist entertainment is bad to indulge in, but perhaps it’s the guilt that makes the pleasure that much sweeter.